There's always a bigger fish. Qui-Gon Jinn said that, and I know you're not going to argue with a Jedi. And whilst there is always a bigger it's also the case that I am a small fish. In the writing world I'm a herring. Possibly red.

Anyway. The point is that small fish gotta hustle or they become small fish sticks. So, I've done my best to market The Emperor's Knife, spent a small fortune on posting copies hither and thither, and generally tried to hold up my end of the bargain any writer strikes with their publisher. I also keep a close eye on the painful business of bookscan which tears away the weasel words we writers comfort ourselves with and hits us upside the head with cold hard figures. Bookscan data is available to authors who sign with the program at Amazon and claims to catch about 75% of all sales on a weekly basis across the whole of the USA from bookshop tills to Amazon sales.

The graph below charts The Emperor's Knife sales across the 30 weeks since its US release.

You'll note a 'graceful decline' from modest beginings. This graceful decline carries us from roughly 80 sales a week early on to 40/week after 20 weeks. Sales halve in 20 weeks. At the point indicated by the arrow something happens. Sales start to halve every two weeks! 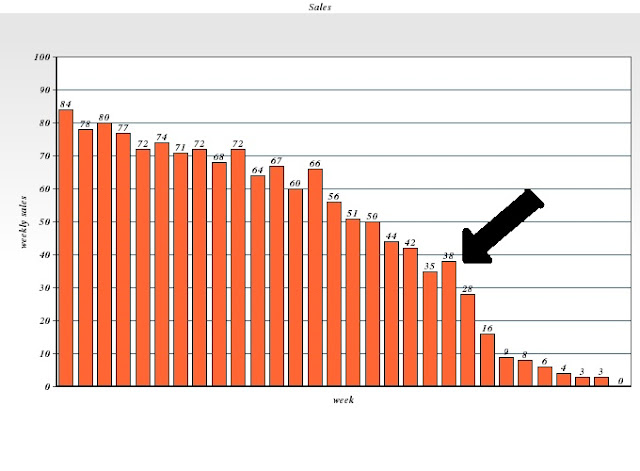 The fall across the first 20 weeks is the kind of profile most books have with sales slowly dropping as the initial rush for a new title fades and the reviews stop hitting the blogs. The fall for the last 10 weeks is something else. That's the profile of sales for a book that simply isn't being replaced on the shelves when copies are sold.

Now small fish have small publishers, in my case Night Shade Books, so I sent them an email to find out what the deal was. It turns out that NSB's distribution has been problematic of late. They had to switch distributors because the old one wasn't living up to expectations, and the change-over seems to have left quite a few crates of books stranded in warehouses... The good news is that whilst all the accelerated decline was due to books not being replaced - some of the decline was due to books not being replaced because there were no replacements to be had. In short, The Emperor's Knife sold out its print run but confusion over distribution combined with the imminent release of the trade paperback (now out) meant that a 2nd edition never quite happened.

So, I'm now a small fish that's happy the 4,000 hardbacks sold out, and sad I never got to boast about a 2nd edition.

At the end of it though, I'm still a small fish and if I don't watch my figures, watch my publisher, toot my horn, and do all those other things I gots to do + write another book ... well I'm going to get lost in the weeds or chewed up and spat out.

I seem to have inherited a notebook that belonged to my mother. In it she wrote down quick thoughts or quotes that she found meaningful. I've found she liked to describe unnamed people. To me these are snapshots that she took as she moved through life.


"A person who puts people under the obligation to attest to her niceness."

"Someone who enters, talking, switching on bright lights as he goes."

"The stance of one perpetually braced for a burden . . ."

"A woman has uncanny ability for sensing when talk is tending towards what is of no interest to her--or is threatening--and forestalls."

"Man walking--looks embarrassed to be seen, especially by women."

"Man who's beaten in an argument with a woman--looks bewildered--cheated--as if something critical has been overlooked, a mistake has been made."

"Scrubbed, smiling American ladies who are merciless and uncompromising."

"Strange woman walks up to fat girl eating ice cream cone with friends, snatches her cone and throws it away."


Don't be surprised if some of these turn up in a book of mine.
Posted by Unknown at 2:56 PM 1 comment:

I've been working on about three different blog posts--one on religion in fantasy, one on record stores (or the lack thereof), and one about writing. But since none of those have been completed, I will instead show off the cover for Knifesworn! The expected publication in the UK is still November (December in the US). I will update if that changes.