Congratulations to Archaism, the winner of Mage's Blood! He will be receiving his free book soon. Previous winners: 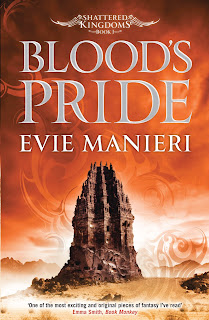 This book has not been released yet in the United States! Americans, jump on this and get a first look + the British cover!

Rising from their sea-torn ships like vengeful, pale phantoms, the Norlanders laid waste to the Shadar under cover of darkness. They forced the once-peaceful fisher folk into slavery and forged an alliance with their former trading partners, the desert-dwelling Nomas tribe, cutting off any hope of salvation.

Now, two decades after the invasion, a rebellion gathers strength in the dark corridors of the city. A small faction of Shadari have hired the Mongrel, an infamous mercenary, to aid their fledgling uprising--but with her own shadowy ties to the region, she is a frighteningly volatile ally. Has she really come to lead a revolution, or for a more sinister purpose all her own?

This book features a desert-dwelling peoples named the Nomas. To win a copy of Blood's Pride, please name another desert culture from a sci fi or fantasy book. On Friday I will roll a die and randomly pick a winner! Good luck!

This giveaway has ended. The winner is Periklis Begzos. Congratulations!
Posted by Unknown at 9:18 AM