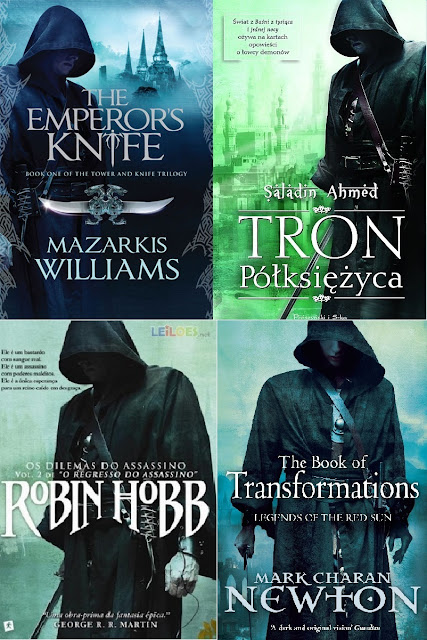 He was Mark Charan Newton's hooded man first on The Book of Transformations, he turned left and suddenly found himself striding the Cerana sands bearing The Emperor's Knife on my cover. With an about turn to the right he menaced the world from Saladin Ahmed's Throne of the Crescent Moon and found himself talking in Polish. A beat later and the man's spouting fluent Spanish from Robin Hobb's excellent Assassin's Apprentice.

Who is this masked hooded man? Where will he turn up next? Where else has he been already?

Putting to one side the issue of this stock-character-of-easy-virtue I hope that the fact four such varied and fine (though I say it myself) novels lurk behind his menace is a fact that puts fresh shine on the well-worn directive never to judge a book by its cover.

I'm offering a prize of arguably huge value (call it a bounty) to the first person to spot our man in action on any other covers, and a prize of immeasurably less value to anyone who finds an example of cover re-use involving 5 or more covers!
Posted by Unknown at 1:52 PM